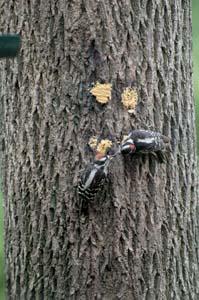 Right now new birds and strange new behaviors are being seen in backyards. No, it's not new birds species; it's young hungry birds.

Many bird parents show their fledglings where to find food and how to eat from feeders. But how do you know if it is an adult or this year’s offspring? Here are some clues to look and listen for at your feeders.

Watch for one or more birds closely following or outright chasing a parent. This often occurs in the first two weeks after leaving the nest.

When hungry, many fledglings harass their parents with an incessant "feed me." These can be single or double noted calls that sound like squeaks or chip notes. Chickadees and goldfinches are notorious for incessant feeding chatter.

A fledgling may beg with its mouth open toward the parent. A juvenile may also move its head side to side and flutter its wings to get its parents' attention.

Fledglings are still growing out their feathers so they can appear very mottled or slightly fuzzy. There are often spots or streaks on the head, back, breast and/or flanks until the feathers are fully grown.

No “End” in Sight

Tail feathers are usually the last to fully grow. Young birds' tail feathers can appear very short or it can look like a bird has no tail.

Keep your feeders full and watch for new birds and new behaviors this season.